Big call: comedian Dom Joly participates in the launch of a retro Nokia 3310

According to the Royal Society of Chemistry, a quarter of households in the UK have at least one old, unused mobile phone gathering dust. But millions of people could be missing out on a tidy profit, as handsets can still be worth something, even if they’re old or broken.

A few rare models can fetch thousands of pounds as collectibles. But even more common versions may still have value.

Apple’s highly anticipated iPhone 14 went on sale Friday, sparking excitement among fans of new technologies. This is the first model that can automatically call emergency services in the event of an accident and allows you to send text messages using a satellite connection when you cannot get a signal or wifi. -fi.

But there are also plenty of reasons to get excited about older handsets – some could even set you back thousands of pounds.

The old phones that are worth thousands

Cell phones are so ubiquitous that it might seem hard to imagine that they could be considered collectibles. However, some of the oldest and most iconic can now command large sums.

Lynsey Chilcott of Love Antiques explains: “The oldest telephones were not made on the scale they are today and therefore many are rare and continue to have value as objects of collection.”

She adds that if you own one of these older phones, you should seek expert advice and consider auctioning off to get the best prices.

Golden oldies… as big as bricks

Early cell phones were brick-sized, heavy, and had short battery life. Today they are gone, but iconic and collectable.

The original ancestor of mobile phones. It came out in 1983 and was heavy, huge and with a 30 minute battery life.

Technically a car phone, this handset was arguably the first portable mobile and went on sale in 1981.

Make a fortune with a Luxe phone

Over the years, phone companies have released limited-edition deluxe versions of handsets designed for posing as much as texting or making calls. Some are valuable today.

Nokia launched its Vertu Signature range in 2003. Regular Vertu phones now sell for around £50, but some of the luxury versions are worth thousands. A diamond-encrusted model in 18k white gold is worth over £20,000, provided you have the original packaging and papers proving authenticity.

Released in 2005, there are versions sporting leather, titanium and carbon fiber coverings and even a real sapphire in place of the navigation button. Also available in 18 carat gold plated.

Not for sale…but still wanted

Models that never hit the market are often the most valuable and sought after due to their rarity. There are plenty of fakes floating around, so buy only from a reputable seller or auction house.

Apple’s iPhone released in 2007 marked a turning point in mobile technology. If you have one of the early 2G phones it’s probably worth around £2000 if it’s still in the box. But, prototype models can fetch tens of thousands of pounds. Prices vary widely, but have reached £30,000 in online auctions, according to Love Antiques.

Another prototype, this model was never sold, so handsets are rare. It dates back to 2003 and would have beaten the iPhone as the world’s first smartphone… if it had ever been released. 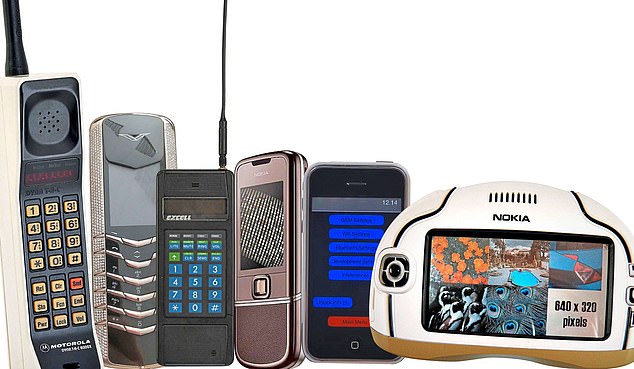 Ringing a fortune: Left to right, the Motorola 8000x; the £20,000 diamond-encrusted Virtue; the Technophone; Nokia Sapphire; the prototype of the iPhone 1; and the Nokia 7700, which was never sold

There are a number of tech reselling companies that will buy phones even if they are old or damaged. These include musicMagpie, We Buy Any Phone, Compare and Recycle, Mazuma and Envirofone. You may only gain a few pounds, but it’s better than letting it gather dust. Antonia Hristov, expert at tech resale service Compare & Recycle, says a Samsung Galaxy Note 4 in good condition will set you back £20. The Apple iPhone 6, also in good condition, could fetch you up to £14; the Motorola Moto G4 is worth between £14 and £16 depending on internal storage; and the first-gen Google Pixel still costs up to £20.

“The best-selling phone is an iPhone 11 and is worth up to £317,” says Hristov. “The oldest mobile phones in the top 20 are the original iPhone SE and iPhone 6, both over five years old.”

The online marketplace eBay, Gumtree and other Facebook or local online community groups allow you to list your old phone and decide on the asking price. You might get more than from a tech reselling company, but that involves more hassle.

Before selling or giving away an old handset, be sure to delete all your information, remove the SIM card and restore it to factory settings.

Remember… all old phones have value

Even if you can’t sell your old phone, it may still be valuable to someone else. They can be refurbished and given to people who cannot afford to buy their own, or taken apart and their parts reused.

You can donate old phones to Vodafone’s Great British Tech Appeal or O2’s Community Calling. Compare and Recycle, Sell My Mobile and Compare My Mobile bundle offers from dozens of services that will buy, redistribute or recycle your old phones for you.

Some links in this article may be affiliate links. If you click on it, we may earn a small commission. This helps us fund This Is Money and keep it free to use. We do not write articles to promote products. We do not allow any business relationship to affect our editorial independence.